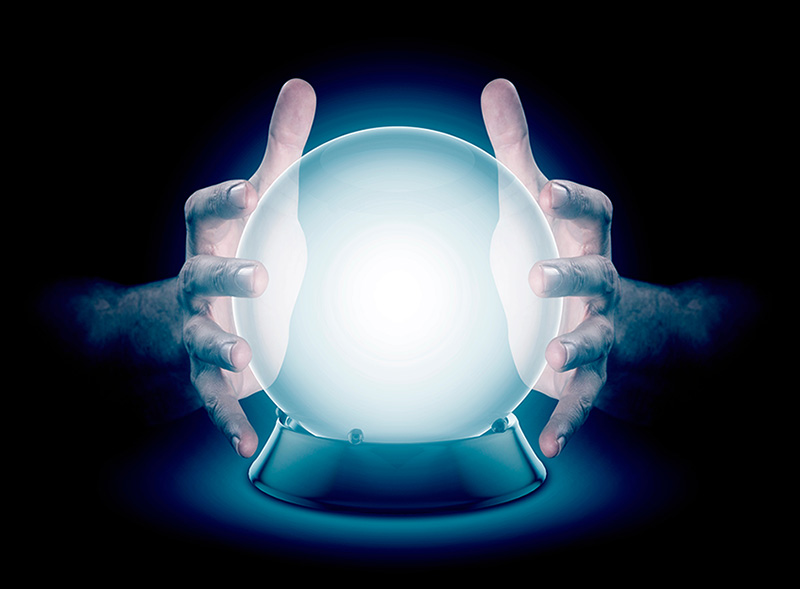 You can’t throw a rock at the financial press this time of year without hitting an article about predictions for 2023. By the nature of predictions, almost all will be dead wrong.

I mean, the foremost futurist in 1970 predicted that the most popular vehicle in 1980 would be a flying car. Instead, it was the minivan! It was all about demographics - soccer moms needed space, not wings.

Predictions drum up attention, and the one correct guess will be promoted heavily a year later even if the other nine are completely wrong.

Claiming to know what is going to happen can lead to inflexibility, which is the last thing an investor needs. We must be ready for anything.

Because, make no mistake, we are in uncharted territory today. We haven’t had a land war like this in Europe since 1945. We haven’t had inflation like this since the 1970’s. And we haven’t seen interest rates rise this fast since 1980.

So what do we think is going to happen? 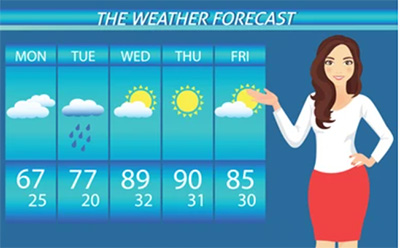 Well, taking Mr. Buffett’s sage advice to heart, I try to avoid predictions. Instead, I like to think in terms of probabilities.

Probabilities are what weather forecasters use when they proclaim “20% chance of rain.” What such a statistic does is prepare you for a certain likelihood. You might take an umbrella if the odds are 50%. Probably not for 20%.

There is another element to this probability thing. Humans don’t (for the most part) affect the weather the next day. It is primarily a deterministic system that an umbrella won’t affect.

But financial markets? They are what George Soros calls ‘reflexive’ systems where investor’s thoughts and actions change the outcome on a daily basis. This means probabilities have to take into account what investors are thinking today, and what has already been discounted by the market.

An example of this is the fable of The Boy Who Cried Wolf. In a deterministic world, the shepherd boy cries “wolf!” and other shepherds run over to help protect his sheep. One action leads to a defined outcome.

However, this boy cried “wolf!” when there was no threat and changed the behaviour of the other shepherds. What they expected did not happen, and so they changed their expectations. A deterministic system became a reflexive one. And the sheep got eaten. Maybe the shepherd boy too.

Markets are like this. They change as people’s fear, greed, and expectations change on a daily basis.

Let’s take a guess at some probabilities of today’s major investment arenas.

The prevailing opinion today – held by most investors and money managers – is that we will enter recession in 2023 and stocks will fall. The big question is whether they fall in the first half of the year or the second half. There is great certainty that they will fall.

How do we know?

Many investors have pulled money out of stocks and are sitting in cash. Hedge funds have record short positions in place. Sentiment of businesses and investors is near rock bottom.

Caution was a sound action a year ago, except nobody was doing it. In January of 2022, almost no one was expecting a tough year. Today – January 2023? Everyone is gloomy.

Sure, there are good reasons to be cautious. The S&P 500 index of stocks yields 1.74% (source: Y-Charts) compared to 4.90% for a one-year T-Bill. Stocks need their yield plus a decent capital gain to compete with risk-free investments.

But the market may have already adjusted for this. The S&P 500 returned -19.4% last year and the NASDAQ was even worse at -33.1%. Canada’s TSX index was a world beater at -8.7%. Parts of the investment universe have been decimated, like cryptocurrencies and all the new technology stocks listed in 2021.

Stocks have already discounted a recession this year.

Markets act to embarrass the most people, and both bulls and bears would be surprised by a market that is all commotion and little locomotion in 2023.

So why just a 60% probability of a flat market? There are still too many things that could go wrong. Alternatively, back-to-back negative years are rare, so the possibility exists that this could be a decent year for stocks.

Energy investments in oil and natural gas were the belles of the ball in both 2021 and 2022. If you didn’t own energy in the last two years, you didn’t make much money at all.

The good news for energy stocks is they remain cheap and have powerful momentum. The world stopped looking for new reserves years ago just as regions like India are industrializing rapidly. Oh, and there is a war involving the world’s second-largest energy producer (Russia). Only 8.5% of Indian households owned a passenger vehicle in 2021 (source: Decade of Energy).

The bad news? Energy markets know all of this. Energy is now everyone’s favourite new toy and there are numerous predictions for oil to hit $100 per barrel and higher. But, a recession could get in the way, as well as peace in Ukraine. Russia has a lot of oil that the west is refusing to buy. Attitudes change when peace breaks out.

The probability is that oil trades between $75 and $90 per barrel. That’s plenty of margin for Canada’s energy companies to make a decent return, but we don’t expect 50% years like we have seen.

We hold the senior Canadian energy companies in portfolios and will continue to buy them on any weakness.

Interest rates are in a cosmic struggle at the moment. On one side, you have central banks attempting to cool the patient using rising rates to stop a fever. We have seen short term rates rise from 0.25% just over a year ago to 4.25% today - the fastest increase in 40 years. This is all being done to chill inflation. In other words, to take the heat out and cure the disease.

One side wants the patient blue in the face to stop inflation while the other side is wrapping the patient in blankets and feeding him warm soup. Both cannot win, so either central banks capitulate and let inflation stay high so that the economy (our patient) can keep breathing, or governments in power let the chill of a recession work itself through.

Which wins? It may be another of those ‘both can happen in the same year’ paradoxes. Every slowdown has seen a dramatic cut in rates. However, central banks around the world have discovered that 0% interest rates are not the magical solution to everything. There ain’t no free lunch, in other words. Money doesn’t grow on trees.

At one point in 2020, there was approximately $17 trillion in negative yielding bonds. Today, there are zero. Rates have been hiked everywhere to fight inflation and so far, these efforts appear to be working. Lumber, natural gas, wheat, and rubber (just to name a few commodities) are all in steep decline. Make anything expensive and people buy less – it’s not rocket science.

So why just a 60% probability that rates fall further? China is reopening. Politics are a mess everywhere. And it has never been more expensive to open a new mine for anything – copper, lithium, gold, fertilizer – than it is right now. A mild recession causes demand for “stuff” to fall, so inflation could dip further. But, the inevitable recovery reverses this.

So, bond investors may want to keep their maturities short. Inflation is declining as we speak but it isn’t going away.

Why should we care what central banks do? They are among the biggest buyers of assets on the planet. What they do affects everything.

From 2009 through 2021, central banks around the world bought bonds through Quantitative Easing. They did this for a variety of reasons, but the end result was that they bought trillions. And bond prices went up. The yield on the U.S. 10-year bond was 3.8% in late 2009 and fell to 0.50% in July of 2020. Bond prices almost doubled.

So what are central banks buying today in record amounts? Gold. 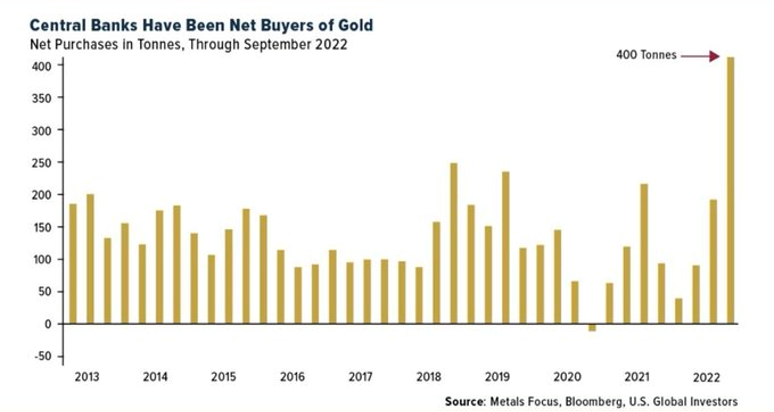 Why? Who knows? Russia is a big buyer, since they don’t trust the U.S. dollar any longer. China is another huge buyer, perhaps because they want their currency to supplant the U.S. dollar.

Few investors care about gold anymore. But the largest investors on Earth – central banks – certainly do.

Again, this is just an informed guess based on my assessment of the probability.

In the end, the best investors pay little attention to economic forecasts and most attention to what individual companies are doing. Warren Buffett’s biggest bets are Apple (NASDAQ AAPL), Bank of America (NYSE BAC), and Chevron (NYSE CVX). He has faith in U.S. ingenuity, its stable banking system, and the ongoing need for hydrocarbons. Top value investors we follow own stocks in China and Asia (cheap because of their draconian Covid response), as well as pet drug companies.

There will be all sorts of opportunities in 2023. We look forward to finding them.